In 1999 First Presbyterian Church of Ann Arbor started the Peru Task Force. Its purpose was the development of a long term relationship with MISIUR (Misión Integral Urbano Rural), a Presbyterian agency in Peru that provides much needed support for underserved families, particularly women and children affected by the Shining Path terrorist movement in the highlands of the Andes. The group made 9 trips to Huanta to provide support, develop relationships and help with the maintenance of the property. At its peak, the project provided spiritual, educational, medical and nutritional support on a daily basis to more than 80 children. In 2010 the political situation became more volatile and MISIUR was compelled to abandon the project. The Peru Task Force mourned the loss of the project and especially the relationships built with the children, mothers and teachers. The group reflected on its desire to continue serving and sharing God's love with people in Latin America and following more than a year of prayerful research and discussion with PCUSA mission leadership, the group decided to focus its efforts in Nicaragua, the second poorest country in the western hemisphere. In 2011 the Peru Task Force officially became the Latin America Task Force. The change in focus and subsequent name change was supported by FPC's Session. In 2013 the name was changed to Nicaragua Task Force. 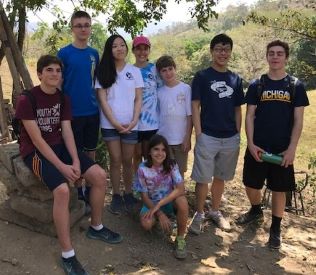 Nicaragua’s flag is simple, three broad blue and white stripes with a central triangle containing symbols of the beaches, mountains, volcanoes, and lakes of this largest country in Central America.  It is, indeed, a country of unparalleled beauty.  However, that flag and beauty cannot hide the economic, social and political ills.  Nicaragua is second only to Haiti among the poorest countries in the Western Hemisphere, many live in dirt floored shacks made of found materials, and revolution and dictatorships have been the rule of the land.

Against that backdrop, First Presbyterian Church has sought to provide friendship, assistance, improved educational facilities, and to build relationships with five intergenerational trips, focusing on what the Nicaraguans want rather than what we think they need.  Once we were asked to build a much-needed school room. We said that there are only 10 of us, we can’t do that in a week.  They said, “There are also 10 of us.  We can do it together.”  We did—working shoulder to shoulder.

For each trip we worked through CEPAD, a council of Protestant churches, dedicated to leadership training, sustainable agriculture and economic development in Nicaragua.  We have seen, first hand, the fruits of their programs.  Insurrection and Covid interrupted many delegation trips to Nicaragua, including our own, but CEPAD has continued its work.

We have also had the good fortune of getting to know, and sometimes work with, several PCUSA Mission Co-workers.  They include Doug Orbaker, Justin and Renée Sundberg, Ian Vellenga and Jhanderys Dotel-Vellenga 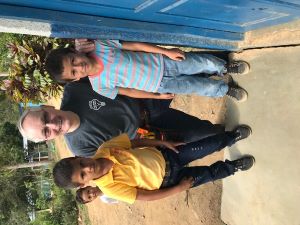 While we at First Presbyterian continue to support the work of CEPAD, we also look forward to returning to work side by side once again.  The adults are most friendly and appreciative but the kids…the kids can melt the hardest of hearts.

About the Nicaragua Mission Team 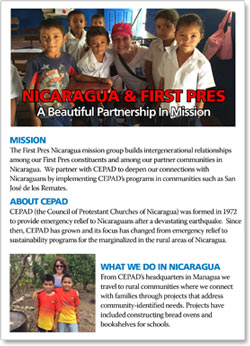 The Nicaragua Mission Team is happy to welcome new members, and encourages interested people to attend a meeting or contact the current leadership to find out more about future trips and other important work that needs to be done to make this group successful.  The Nicaragua Mission Team works in collaboration with the CEPAD (Council of Evangelical Churches of Nicaragua). To learn more about the current CEPAD mission co-workers in Nicaragua, visit: http://www.presbyterianmission.org/ministries/missionconnections/sundberg-justin-and-renee/

Our return trip to Quebrada Honda, Nicaragua was very rewarding and the community has asked us to continue the relationship. Half of our mission team had served in Nicaragua several times, and half were T2A2 members who had never visited the country before. We completed the electrical wiring of the school we had built over the last two years; then received a request from a nearby community to build a classroom complete with electric wiring. This creates a dilemma. Should we focus our efforts on one community? Or should we go with what we do best – electricity – and wire as many communities as we can?

Throughout the trip our team reflected on, discussed, and strove to build and serve through person-to-person relationships – with our team members and the Quebrada Honda community. During morning devotions and evening discussions, we reflected on the joy of actively including community members in our electrical work as well as listening to and prioritizing their needs, dreams, and goals for their school and community. Local residents worked tirelessly – drilling holes, gluing conduit, and cutting wires. Working side-by-side with members of Quebrada Honda brought much joy. At the same time, we supported each other as a team. We formed friendships, encouraged each other, and openly discussed challenging topics with honesty. All involved in the project worked as members of the same body of Christ, each with their own gifts and functions.

The Council of Protestant Churches of Nicaragua (CEPAD) works with six other communities in the state of Pantasma, besides Quebrada Honda. When we initiated our partnership in Pantasma, we chose to focus our efforts in one community so we could develop a closer relationship with the people. We learned from our previous assignment in Nicaragua that spreading the energy of our small team over eight communities prohibited close ties to any of them. However, now that word of our success has spread to the other communities CEPAD works with in Pantasma, we are hearing of resentment from other villages. Our team will have to wrestle with this problem before our trip next spring. 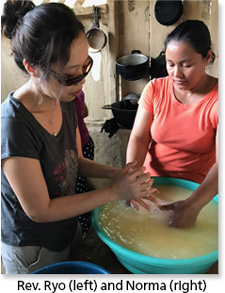 Like many Nicaraguan women, Norma seems ageless. She has little gray hair and her face is unlined. Her smile can light up the room. She is a terrific cook! But what makes her remarkable is her vision for herself and her community.

Norma is a wife, mother and land owner. Her farm is perched on a hill overlooking the school in the remote community of Quebrada Honda. She is a well-respected leader in the community.

After doing her daily chores and making tortillas and cheese for the market, Norma teaches preschool in a neighboring community. On Saturdays she makes the 4 hour trip, walking many miles to catch a bus, to attend the university in Jinotega, after classes makes the return trip. With each year completed at the university, Norma becomes qualified to teach another grade level. That’s how it works in Nicaragua.

In 2016, the Nicaragua Mission Team in collaboration with CEPAD and the community members, helped construct a new classroom in Quebrada Honda. In 2017 we painted the classroom and built 5 much needed bookcases for the school. We spent time talking and dreaming with the community about the future and what is resoundingly clear is that the community considers education for their children a high priority. They have expressed desire to bring electricity to the school, to light up the classrooms.

With God’s grace, careful planning and with cooperation of the Nicaraguan government, the Nicaragua Mission Team hopes to light up the classrooms in Quebrada Honda. 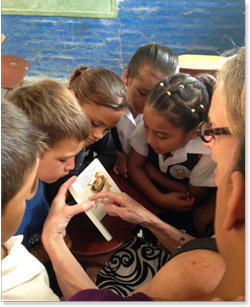 To Learn, To Build, To Understand
April 2-10, 2016 - 12 FPC members, including 3 teens traveled to Nicaragua. Our delegation leader was Justin Sundberg, a PCUSA mission co-worker assigned to CEPAD, Council of Protestant Churches of Nicaragua. After spending a day in Managua learning more about the country, we traveled to the small community Quebrada Honda where we worked shoulder to shoulder with local community members mixing mortar, cutting and laying concrete blocks and making rebar reinforcements for a small classroom. We also painted two existing classrooms. We enjoyed getting to know the Nicaraguans as we shared meals, played soccer, read story books, taught lessons, sang and laughed together. We were certainly blessed to see God every day in the faces of our Nicaraguan brothers and sisters. Each day we had devotions and reflections led by Melissa Anne Rogers and on our last evening in Granada we worshiped and celebrated communion together. We all felt our time in the community was too short and we’ve begun planning our next visit in 2017. Read the full mission report here! 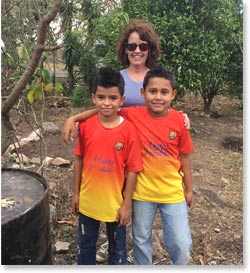 A team of twelve First Pres missioners is in Nicaragua for a week of service and Christian witness from February 14 to 22, 2015.  Our team will be working in a rural community. First Pres is a partner with CEPAD, the Council of Protestant Churches of Nicaragua, an organization helping rural communities and individuals to be the principal actors in their own development. CEPAD’s ministry model relies on teaching over hand-outs and giving people the tools they need to sustain themselves and their families. Follow our Mission Team on Facebook and visit http://www.cepadnica.org/ for more information.