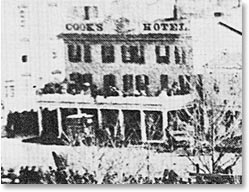 Rev. Noah M. Wells, pastor of a Church in Detroit, came to Ann Arbor, two days journey on horseback, and organized the First Presbyterian Church of Ann Arbor on August 21, 1826. Seventeen people, members of Presbyterian and Congregational churches in New York and Virginia presented Certificates of Church Membership they had brought with them. One other woman joined that day on Profession of Faith by baptism. John Beach became our first installed minister in October 1831 and served until July 1838.

Our services in those early years were held in log schoolhouses, the ballroom of a tavern, and on the second floor of Cooks Hotel. By 1829 the first frame church, 25 feet by 35 feet, was built and included an uncovered belfry at the front with a small bell used to announce Sunday church services. Each each day it was rung at 12 o’clock noon, and at 9 p.m. it called out bedtime for children. The Michigan Antislavery Society held its organizational meeting in this church November 10, 1836.

In October 1843, Reverend William S. Curtis became our second installed minister. In 1845 he married Martha Leach who had been active in organizing groups of women in churches in Pennsylvania, New Jersey and Massachusetts. Mrs. Curtis, sometime between 1845 and 1855 organized the women of this church into what was later called “The Ladies Aid Society.” Since that date the ladies of our church have been active in Local, Foreign and Home Missions and in addition supported medical and missionary students in many countries. Until the 1960s they help support our church budget with suppers, baked goods, and hand-work sales.

By 1837 the congregation outgrew the small frame church and built a larger frame church across the street with a much larger seating capacity and a taller bell tower. The University of Michigan moved from Detroit to Ann Arbor in 1837 and held its first graduation in the church in August 1845. In the late 1850s the building was sold and moved a few blocks away to make room for our first brick church. 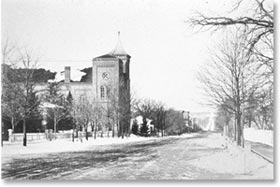 A new brick church was begun in 1860, just at the beginning of the Civil War. But with wartime constraints the second spire was not completed until 1872. The new sanctuary had a seating capacity of about one thousand people and many Sundays the pews were filled with up to six hundred students. These were the years during which University of Michigan students were required to attend church. The building was described as follows: “The entry to the building and stairway to the auditorium is dismal, cold, harsh and has an uninviting character but the auditorium (nave) was pleasant enough.” It was in this building that the ladies did most of the weekly and annual cleaning, carpet beating, woodwork polishing and washing windows.

Our campus ministry began with the chartering of the Tappan Hall association in 1866 by Dr. Gelston. We provided the first student center buildings, one called Sacket Hall, and the other, the McMillen building at the corner of State and William streets. Since then we have been actively involved with campus outreach.

In the 1920s it became apparent that the Red Brick Church was hopelessly outdated and Pastor Anderson and a committee began a search for property on which to build a new church. Professor Demon’s widow graciously offered her property to the church for only half its market value. She thought it was too lovely a place to be used by a land developer, but perfect for a church. The property was known as “the Oak Grove” and sometimes the “Picnic Grove.” We purchased the property and it is here we worship today. The building committee sold the Brick Church to The Ann Arbor News in 1935 to make way for their office building and printing presses. 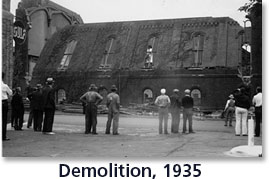 From the summer of 1935 and until the opening of our Washtenaw Avenue Church in 1938, we worshiped in the Masonic Temple. On January 23, 1938, our new building was dedicated by Dr. William P. Lemon, our ninth installed minister. The church built the nave and social hall, and the University of Michigan Presbyterian Corporation added a four- story attached wing for University student activities. 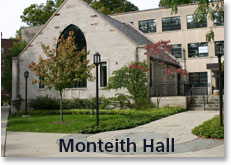 Since that time our congregation continued to grow, additional rooms were needed for Sunday school, offices and congregation meetings. In 1965 our Education Wing was dedicated, and on December 24, 1971 we purchased the student wing from the University of Michigan Presbyterian Corporation. In the 1990s we renovated the education wing and added the Monteith Chapel, dedicated in October 1998. 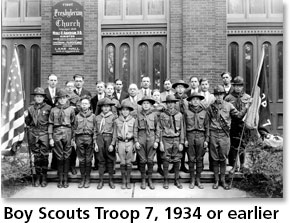 We have sponsored a Boy Scout Troop Number 7 since 1918, supported refugee families, provided meals for the poor on a weekly basis, and actively support the Inter-Faith Council of Congregations of Ann Arbor, and other local suport organizations.

The women, since they were first organized, have supported mission work in India, Siam, Japan, China, Persia, Mexico, Hawaii, Liberia, Laos and Alaska. They currently work with many foreign missions as well as local missions in and around Ann Arbor and Detroit such as Friends in Deed and House by the Side of the Road. Following WW-II the women shipped tons of clothing and blankets to war-torn Europe. 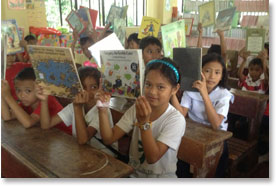 Church members currently participate in mission trips to work in the Philippines, Nicaragua, Haiti, Israel/Palestine, and Russia, places in the United States, and also participate in the Habitat for Humanity House of Faith and at the Delonis Center. Our high-school students go on mission trips, our Stephen Ministry helps to support members in time of need, and we support a campus minister and campus interns, with salary, office space, and meeting rooms. We also have a Veteran's group which meets monthly.

Services to the military have included Civil War, WW-I support, and a site for a WW-II U. S. O. center, offering lunches for Officer Training Cadets at the University of Michigan. We also provided lunches and trips to football games for hospitalized soldiers from WW-II and Korea, patients at Percy Jones Hospital in Battle Creek. A bronze plaque memorializes our members who served in the war including those killed in action.

Beginning in 2001 the first Lilly Endowment resident ministers shared their lives with us. This residency program was organized by Eldon Beery and continues today. All residents were ordained or became ordained after joining our staff. To learn more about our residency program, visit our Residency Program page.

These are just a few of the many mission projects our church supports, in which our members work to serve others in gratitude for God’s blessings.

More About the Church