"(God) shall judge between the nations and shall arbitrate for many peoples; they shall beat their swords into plowshares, and their spears into pruning hooks; nation shall not lift up sword against nation, neither shall they learn war anymore."
— Isaiah 2:4 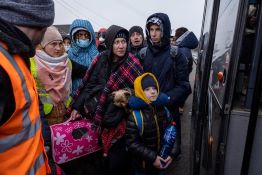 The current Russian invasion that started on February 24 follows eight years of conflict between Russia and Ukraine. Hundreds of thousands of people across the country are enduring bombings and assault by Russian military forces; and have lost power, been cut off from water and fuel. As people head toward the western regions, there is a shortage of food and other basic supplies. The reports of displaced persons inside Ukraine continue to rise every day, already in the hundreds of thousands, if not already one million. The UN anticipates that as many as 6.7 million will be displaced internally. Likewise, Ukrainians are fleeing to neighboring countries, primarily to Poland, Hungary, Moldova, Romania, Slovakia, while others have moved to other European countries. Again, current estimates from the UN are that the refugee numbers could also reach several million. These borders have remained open until now even as lines are growing.

Partners are raising particular concern for the women and young children who make up the majority of the refugees as many men are now barred from leaving the country. As part of the international humanitarian community, PDA urges that governments and non-governmental organizations provide assistance without discrimination due to concerns for the Roma and people of other nationalities who have also been displaced by the conflict.

In the midst of the chaos, there are sibling churches and ecumenical partners who are already providing assistance with basic items for survival. Initial assistance being provided includes shelter, food, clothing, blankets, baby food and diapers, other hygiene supplies, flashlights and candles, generators and fuel.

Our first priority is to provide funding to these partners on the ground. While the scale of this crisis is new, receiving refugees from Ukraine and other countries in Central and Eastern Europe is not, which means we have trusted, established partners with the knowledge and expertise to carry out this important work. In fact, One Great Hour of Sharing — the single largest way that Presbyterians come together every year to provide hope, help and relief — was started in response to refugees coming out of Europe.

Our Presbyterian response to the situation in Ukraine will include both financial and technical assistance as the network of faith communities providing humanitarian assistance grows in the months ahead.

The needs for the response will be great. God’s people are called on to stand in the "GAP" — Give. Act. Pray.

GIVE:   Gifts can be to Presbyterian Disaster Assistance through First Presbyterian Church.  Give online here.  Mark your checks “Ukraine” and place them in the Offering Plate or mail them to:  FPC AA, Finance Office, 1432 Washtenaw Ave., Ann Arbor, MI 48104.