About the Russia Mission Team

The Russian Mission Team was established in February 2012, after an exploratory trip to Russia in October 2011. The trip was funded in part by a grant from the Jeane Seeley Mission Fund. Our group of five, accompanied by Ellen Smith, Presbyterian Mission Co-Worker, spent some time in Moscow, but we also visited Davydovo, a small village in the Yarolslavl region, about a three-hour train ride northeast of Moscow. 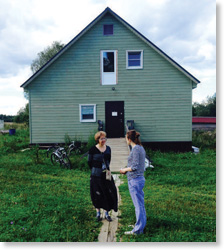 Planning is underway for an intergenerational trip to Davydovo in the summer of 2019. This past August, Linda Speck spent some time there in addition to visiting other friends in Russia. She reports: “The building our 2012 Christmas Eve Offering helped to rehabilitate now has some new occupants. Elena Varganova and her daughter Alexandra live on the first floor. In order to meet the church community’s requirement for permanent residency, she and her daughter lived there for a year. Now they plan to stay! Elena, who has a professional background for her role, has become the hostess for the guest house, shown in the photo. Elena is on the left; on the right is Anastasia Klimzo, who spoke at First Pres while she was in Ann Arbor in 2017. Anastasia’s father, Fr. Vladimir Klimzo, is the priest of the Russian Orthodox Church there; and he leads the community’s ministry to children with disabilities and their caregivers."

First Pres has created a unique partnership with a Russian Orthodox Church in the village of Davydovo, Russia and on September 29 - 30, the Russia Mission Team hosted a special event with Fr. Vladimir Klimzo and Mission Co-Workers, Al and Ellen Smith. An informal potluck was held, followed by presentations on Fr. Vladimir's summer camp at Davydovo, Russia. Fr. Vladimir's slides outlined the history of the church, its restoration, and the development of ministries, especially those for children with disabilities. The next night, Fr. Vladimir thanked our congregation for the 2012 Christmas Eve offering that made possible the restoration of a building that can now serve as a year-round dormitory for families of children with disabilities. Fr. Vladimir showed "before and after" slides of the church and the dormitory. The dorm will allow families to explore permanent housing at Davydovo for their children with disabilities, as they move into adulthood, and beyond their parents' ability to care for them. The Russia Mission Team welcomes interested members of the congregation to consider participating in next July's trip to serve at the camp at Davydovo. Please contact Linda Speck at aa3013@wayne.edu, or Rev. Jay Sanderford at jsanderford@firstpresbyterian.org.

After our team’s trip to Davydovo, Russia, to serve in the church camp for children with disabilities, the Russia Mission Team has decided to make 2015 a year of education. Through a series of events planned to begin in February, we will continue efforts to get to know Russia and its people. We hope to hear once again from those who spoke at the Russian Mission Network Conference in August, to enjoy Russian food, and to engage our friends from St. Vladimir Russian Orthodox Church. As yet we have enjoyed only a sample of what our two congregations can offer to one another through musical events, presentations, and shared meals (including the cooking itself!). Although our team will wait until 2016 to return to Davydovo, we hope to support our brothers and sisters at St. Vladimir as they prepare to send a team to Russia, including youth, in the summer of 2015.

A group of six volunteers (five from First Pres) recently traveled to the small village of Davidovo, Russia, to meet Father Vladimir, a priest of the Russian Orthodox Church. This was the next step in developing a deeper relationship with the church there. While there we were privileged to be able to participate in a camp that Father Vladimir runs for disabled youth and to attend worship services and learn about the life of the village.

Some of our activities while in Russia included sharing crafts with the campers, working in the dining hall preparing food, trying some of the traditional games with the campers, learning about the history of the Russian Orthodox Church, and holding our own devotions as we processed our experiences. We came away from our time there aware of the great need for help for disabled children and aware that what Father Vladimir is doing is good indeed. It is our hope that our church can continue to assist and be a part of the revitalization of the village.