Misson Statement: The Israel/Palestine Mission Team of First Presbyterian Church, Ann Arbor, MI, exists to bear witness to God’s compassion for the people of all religions and ethnicities in the Middle East, including those living in Israel and Palestine, the Holy Land where our Christian faith originated. Through the concrete efforts of our mission team, we make our witness manifest. We partner with many other supporting hands, which allows our witness to extend in meaningful ways from Ann Arbor and the United States to Israel and Palestine.

Our goals and objectives are thoughtfully grounded in our core values and are carefully crafted to build on each other, such that each effort supports all the others.

Who is Abuna Elias Chacour?

Father Chacour, a Melkite Catholic Priest, was born to a Palestinian Christian family in the village of Biram in Upper Galilee in 1939. He became an Israeli citizen when the state was created in 1948. In 1965, Father Chacour was appointed priest of the village church in Ibillin, a small Arab village in the hills of northwest Galilee where Christians and Muslims have lived together peacefully for many generations. In February 2006, Father Chacour was consecrated as the Archbishop of the Melkite Catholic Church of Haifa, Akko, Nazareth, and the Galilee. His vision was, and is, that through education children, youth, and young adults of several faith traditions will learn to live and work together in peace. This vision is a reality in the Mar Elias Educational Institutions.

What are the Mar Elias Educational Institutions? 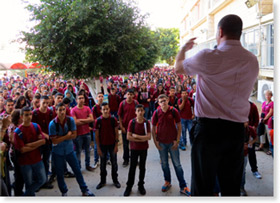 From its inception, the Mar Elias Educational Institutions (MEEI) welcome all religions and all ethnic groups to participate as students, teachers, and staff in an environment where all are equal under God, all have equal respect and opportunity and live in peace. The schools function under these principles as concrete examples of successful peace making in the Middle East.

With the help of nuns from Nazareth, Father Chacour founded a kindergarten in 1970. A high school was established in 1982 and was followed by an elementary school was established in 1997. There are now over 3,500 students attending kindergarten through twelfth grade, drawn from approximately a 25 mile radius of Ibillin. A major portion of the funds generated by the Mission Team is devoted to enlarging the facilities, increasing supplies, such as books and computers, and providing scholarships to assist students from poor families who would otherwise not be able to attend the schools.

The Presbyterian General Assembly has two active Israel/Palestine groups which represent two approaches to creating a “shared society” in Israel. Links are provided to explore the positions of these two groups: Israel Palestine Mission Network and Presbyterians for Middle East Peace.

How can I support the Israel Palestine Mission Team?

Please join us at one of our regular meetings of the Pilgrims of Ibillin: our meetings are normally held on the second Monday of each month at the First Presbyterian Church. You can also contact one of our officers (indicated below) or any member for additional information. We are happy to discuss opportunities for you to support the Mar Elias Educational Institutions and to become involved with our social and educational programs.

In 2001, Rodney Bentz and Judy Stuart established one of the first chapters of the Pilgrims of Ibillin at First Presbyterian Church. Since 2010, the mission team has been known as the Israel Palestine Mission Team (IPMT).

During the last five years, the IPMT has been actively engaged with the Israel Palestine Mission Network of the PCUSA and other national and local organizations to support our goal of peace, justice and reconciliation in Israel and Palestine, which includes both the West Bank and Gaza. The IPMT has held annual fund raising activities and sponsored numerous educational programs for our congregation.

Additional Information About Our Partners

Hand in Hand Center for Jewish and Arab Education in Israel
https://www.handinhandk12.org/